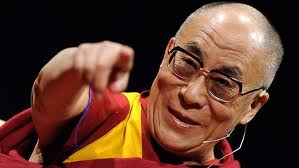 You know you’re in a pretty hip city when its main newspaper’s weekend edition has the Dalai Lama as its guest editor, along with his big smiling mug taking up most of the front page. The theme of the special edition of The Vancouver Sun this past weekend was “Educating the Heart,” a catalogue of mostly good news and good works: youth activism, global organizations addressing the plight of the poor and oppressed, spiritual travel based on inner journeys, alternative health, animal rights, ethical business, and a focus on whether and how values of kindness and peace can permeate society. Reading this paper was not boring, as so many do-gooder publications tend to be, and left me in a quiet calm instead of the usual anxiety I feel after reading the usual news. The medium was certainly the message.
The weekend edition of the paper was the prelude to the Vancouver Peace Summit, a three-day gathering of luminaries including the Dalai Lama, Eckhart Tolle, Maria Shriver, numerous Nobel laureates, and a couple dozen other presenters. To describe the experience of this conference naturally introduces my own biases, like one of the blind men describing a part of the elephant in a way that is unrecognizable to the others feeling a different part. Several thousand people attended this conference, and no doubt each had their own favorite moments or interpretation of its general message. Here are the highlights for me:
The Dalai Lama emphasized again and again the need for women to have greater roles in leadership in all fields because, he said, they are “biologically” more nurturing and have a greater sensitivity to suffering. He feels that our educational system is the domain in which ethics and a connection to the totality of life needs to be taught now that there is a worldwide diminishment of the role of churches and the cohesion of families, arenas which once provided more spiritual and ethical sustenance. Following up on a challenge he made in 2006, he implored the educators and scientists attending the conference to introduce emotional and social intelligence in schools and for the media to start concentrating more on “good news,” stories that uplift our spirits instead of scaring us to death. Along these same lines, Eckhart Tolle suggested the introduction of “awareness” training in schools, not just as one of the subjects but as the main subject–“awareness of emotions, awareness of thoughts, of other human beings and their thoughts,” and for young people to learn to not equate their thoughts with who they are so that a child has a sense early on of his or her own nature and of the nature of the other children. In this regard, British Columbia has an interesting educational program, which came out of the Dalai Lama’s earlier challenge in 2006. As described by presenter Clyde Hertzman, the province is implementing programs of emotional learning and a study involving data from several thousand kindergarten teachers who have mapped early social and emotional signs in young children. Hertzman said that right from the beginning of a child’s life, the emotional atmosphere in which the child is reared is affecting deep structures of brain development and that children who grow up around angry faces and punishing circumstances have brains that are, by the time they enter school, structurally different from children who grow up in kindness and a sense of belonging. While it is harder for the disadvantaged children to thrive, it is not impossible to reverse the damage, and there is an emphasis in catching these situations as early as possible. B.C. is also implementing curriculums in social responsibility and mindfulness training and data is already showing that children in these programs not only exhibit more awareness and compassion for others but fare better in all educational studies as well.
California’s First Lady Maria Shriver and the Dalai Lama had a charming Q and A session in which Shriver asked of His Holiness questions such as, Do you think there will ever be a female Dalai Lama (he said yes) and, What do you worry about? (the environment and the gap between the rich and poor, which he feels is leading to large-scale frustration and anger).
Musicians Peter Buffet and Michael Kott played several soulful piano and cello pieces, one of which was about the dark alchemy of slavery in which “blood is turned into gold.” Its refrain asks, How can you live off the blood of another?” and was accompanied by video images of child laborers, child and adult prostitutes, and other forms of human sorrow.
There was a moment I heard about that I didn’t actually witness. After one of the sessions, the Dalai Lama and Eckhart Tolle held hands as they walked to lunch. It is an image I would have liked to imprint in memory, one that I might call upon in moments of distress. To most of the world, they are probably the two most respected spiritual leaders of East and West. But in these last days and over the many years I have known them both, they have shown themselves to be wise global citizens, beautifully human and simple, doing their part for a gentler world.