Sacred Geometry: The Flower of Life

Sacred Geometry: The Flower of Life 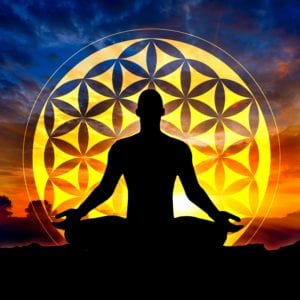 Sacred Geometry is a configurational language of elemental components of the Divine Creative Force that gives birth to all life.

It offers a direct conduit to Prime Consciousness, the Source, by-passing any dogmatic parameters and thus transmitting un-alterable knowledge that exists beyond the reach of religion, philosophy, or personal beliefs.

It is the nameless energetic intelligence that defines the benevolent heart of the Source and if you study it, “Truth may open to you within you”.

Come and learn how to use sacred geometry such as the Flower of Life as a tool to help us in our evolutionary awakening. The “Flower of Life” can be found in all major religions of the world. It contains the patterns of creation as they emerged from the “Great Void”.

Since all life forms function on the vibratory structure of geometrically organized pathways of electromagnetic energy, as we commune with sacred geometric forms we interact with their fields of informational influence which resonate with our own original blueprint.  Let’s learn about our own Sacred Truth.

The sacred Flower of Life pattern is the primary geometric generator of all physical form. The proportions of human body, the nuances of human consciousness, the sizes and distances of the stars, planets and moons, and even the creations of the humankind, are all shown to reflect their origins in this beautiful and divine image. Through intricate and geometrical mapping it is possible to see how the seemingly simple design of Flower of Life  contains the genesis of our entire third-dimensional existence.

The Flower of Life can provide what is considered to be deep spiritual meaning and forms of enlightenment to those who have studied it as sacred geometry.

Sacred geometry can be described as a belief system attributing a religious or cultural value to many of the fundamental forms of space and time. Since contemplating these basic, sacred  patterns of existence, one is contemplating the origin of all things. These patterns are able to give us access to everything ranging from the human body to the galaxies. In the first system, for example, it’s possible to create any molecular structure and any living cellular structure that exists in the universe. In short every living creature.  By studying the nature of these forms and their relationship to each other, one may gain insight into the scientific, aesthetic and mystical laws of the universe.
$25 Love Offering
RSVP / Register at info@soulcenteroc.com

3 people are attending Sacred Geometry: The Flower of Life

Tickets are not available as this event has passed.