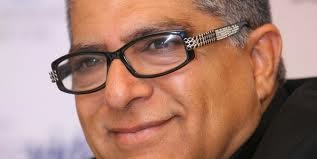 An Interview With Deepak Chopra:  There is only One Consciousness by the Omega Institute

Omega: You’ve had such a prolific career as an author, teacher, lecturer, and physician. How do you stay inspired and centered after all these years?

Deepak: I am always writing about things that I’m exploring; I find myself doing it quite effortlessly. I am disciplined. I practice meditation and yoga and do a workout almost every day. The rest of the time, I am writing about what fascinates me. At this moment, it’s further elaboration of understanding consciousness — its fundamental existence in the universe, and how it projects in our life as our body, our mind, our environment, and our universe.
Omega: How long do you think it will be before mainstream science accepts that consciousness isn’t rooted in matter, catching up with both ancient teachings and the latest leading-edge science?

Deepak: It almost amuses me to think that consciousness is rooted in matter. It’s a form of primitive animism to think like that.
How long will it take? It’s happening slowly. I am getting some traction in collaborating with eminent physicists and neuroscientists who share the worldview that consciousness is fundamental and everything else is an epiphenomenon, including mind and matter.
We’re getting some papers accepted in peer-reviewed journals. I had a paper accepted in the Journal of NeuroQuantology and another paper in the Journal of Philosophy.
Omega: You’ve talked about the rise and fall of what you called “militant skepticism.” Can you elaborate on that? How does the skepticism that underpins the scientific method becomes militant?
Deepak: Skepticism is actually healthy. It is not the same thing as cynicism. Cynicism is to already start with mistrust. On the other hand, skepticism is open-minded and says, “I’d like to see the evidence. I’d like to understand more and I don’t want to rely on belief.” That skepticism underlies the scientific method.
However, if you really begin to understand how we perceive anything, then you’ll realize that what we call evidence or empirical data is not really glimpsing at fundamental truth. It is a description of a mode of observation, through a human nervous system, to questions that scientific human minds ask. So, science is not looking at nature as it is, but nature as it reveals itself to a human nervous system and the questioning of a particular modality in a human consciousness by a scientist.
What we’re seeing here is that our perception is the result of a cosmic censorship. Perception is species specific. It’s culture specific. It’s a learned phenomenon. We learn how to perceive. And then we end up thinking that what we perceive is what is really there. Actually, there’s nothing out there.
All experience is created in consciousness, and the only way to explore this is through transcendence, through self-awareness, through self-reflection, through questioning perceptual reality, through making conscious choices.
Very slowly, what unfolds is the realization that there’s only consciousness. You can’t even say consciousness and its contents because the contents of consciousness are actually patterns of behavior of consciousness itself. Therefore, the universe exists in consciousness as a perceptual experience. The body exists in consciousness as a perceptual experience, and the mind exists in consciousness as a mental experience. There’s only consciousness. If you were religious, you would say there is only God.

Omega: One way to explore consciousness is through meditation. If someone asks you how to begin meditating, what do you recommend?

Deepak: Spend a few minutes every day sitting quietly and just reflecting on who you are, what you want from your life, what is meaning and purpose for you, or what you’re grateful for. And then just sit quietly, either observing your breath, or feeling your body, or if you have a mantra practice, use it. But transcendence is the key and transcendence happens if you just give it time.
I think the biggest obstacle that people have is that they’re impatient. They’re very result-oriented, and also, they’re not really diligent in their practice, even though they say they are.
Omega: If a student asks, “How do I know if I’m making progress in my meditation?” what do you tell them?

Deepak: You shouldn’t be attached to progress, but yes, there are signs. On the level of cognition, you realize that your thoughts are not who you are. On the level of emotions, you are less drawn to melodrama, but you do have experiences of joy, love, compassion, empathy and equanimity. On the level of memory, you’re not victimized. Your memory is sharp, but it’s there only when you need it, so your internal dialogue, which is mostly memory and desire, is very quiet. On the level of sensory perception, it’s a much richer present moment, multisensory experience. On the level of identity, your sense of self is no longer confined to your body.
Those are the earlier signs. Then later, there’s more synchronicity, more flow, loss of fear of death, and less identity with the personal self. That takes a while, but it does happen.

Omega: What can parents do to introduce their children to a meditation practice?

Deepak: During the first years, the more you can totally envelope them in love, attention, affection, and appreciation, that’s the most important thing. At the age of five years, you can start playing games of silence or have one minute of silence every day. Then at six years go to two minutes, and at seven years go to three minutes, like that. When they’re 10 or so, I think you can start the formal practice with them.
Deepak Chopra is teaching a workshop The Future of Well-Being, June 27-29, 2014 at Omega Institute in Rhinebeck, NY.

Your Beliefs Change Your Life by Deepak Chopra! 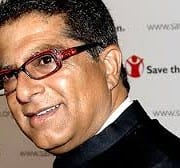 Mary
The Thing Called You